The latest generation of wind turbines announced by the leading OEMs will shift wind turbines to rotor diameters of 150m and blade tip heights above 240m. As a consequence of this, the transport and installation ofmassive blades and towers becomes one of the great challenges in the renewable energy industry over the next decade.

Nabrawind Technologies has developed two solutions to break these logistic and installation barriers: a self-erecting tower and a modular blade joint, both simple to integrate in all existing and future wind turbines.

Towers with heights over 120m are now a reality in all markets, reaching already heights up to 178m in Europe. In 2016, more than 2GW of towers higher than 120m were installed and it is expected this will grow to more than 10GW a year within 5-10 years (more than 15% of the total wind energy market). In fact, all major producers of wind turbine generators have included towers with heights beyond 160m in their catalogues.

However, the challenges of these large scale towers are limiting its installation in many cases: exponential increase in cost, difficulties with transport and/or logistics design constraints, scarce availability and high mobilisation and rental costs of cranes, increased time required for the installation of the wind farm and lastly an increase in the tower slenderness that complicates the compatibility between the tower stiffness and the rotor speed.

For several years there have been a variety of proposed alternatives to solve one or several of these problems. However, no solution has been able to solve all problems at once like Nabralift, Nabrawind’snew crane-less tower.

Nabralift consists of two different parts. The upper part of the tower, with a length equal to that of the blade, is a tubular steel tower, which is a conventional technology that is widely recognised and very competitive if the aforementioned barriers didn’t exist. In the lower part, a framed structure is introduced with three main columns of approximately one metre diameter, connected diagonally, providing the required torsional and shear rigidity. These columns have a distance between each other of between 14m and 18m, which provides high stiffness and a significant weight and costreduction compared to other tower solutions.

Its straight profile and constant distance between the tower columns simplifies the self-erection, which is carried out with conventional hydraulic devices widely used in the heavy lifting sector. This self-erection is carried out once the nacelle and the rotor are installed, eliminating the need for large cranes during the installation and operating stage of the wind turbines. The next image shows the differences between the conventional lifting of a wind turbine and the new system.

This solution overcomes all the existing problems with large scale towers: 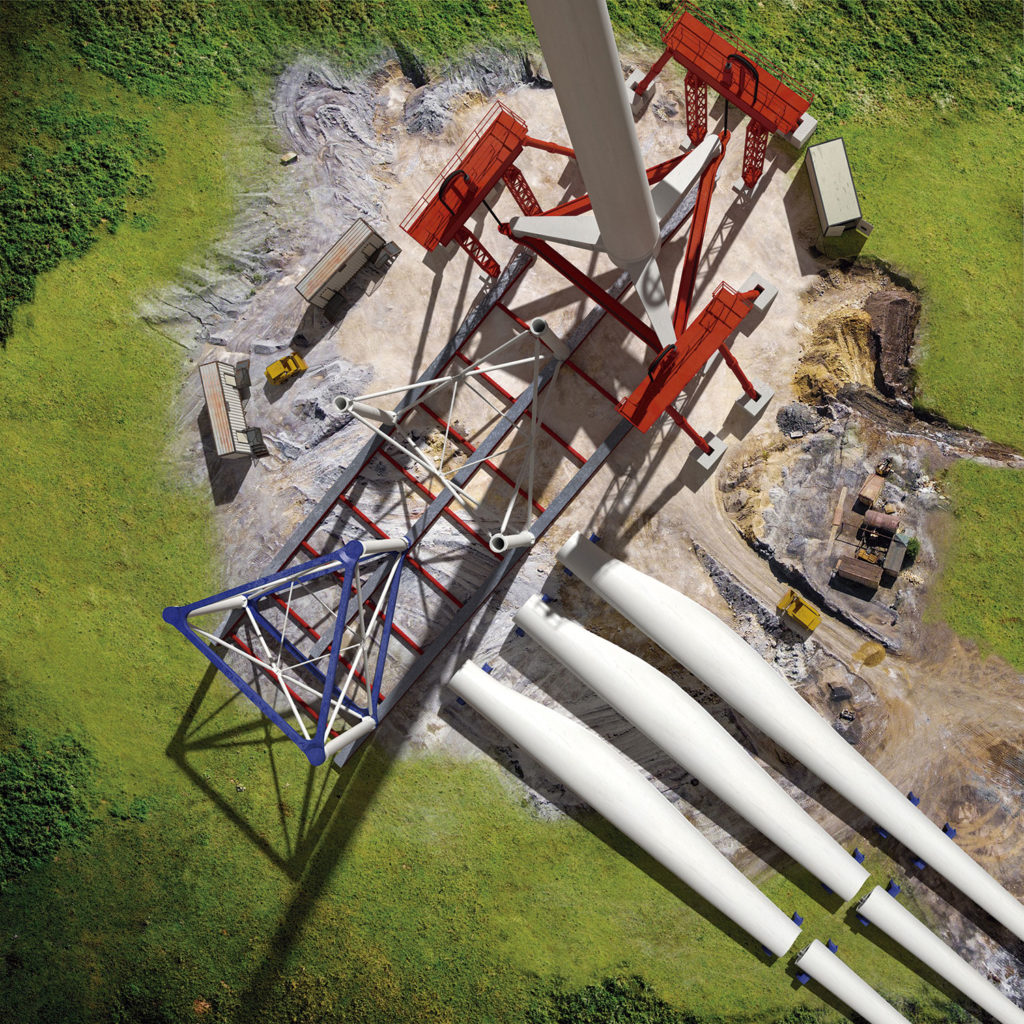 Putting all this together, the savings for a turbine of 120-140m can be higher than 100k€, and this saving increases for higher towers.As a consequence of this, the Cost of Energy (CoE) can be reduced by 5% in wind farms with a wind resource appropriate for high hub heights.

Tower cost evolution and cost of energy in relation to height

Certification process and a real full-scale prototype of the first model of Nabralift (160m height tower, designed for the 3-3.5MW range wind turbines) will be completed in the first half of 2018. First commercial deliveries are expected for 2019.

As previously mentioned, one of the main advantages of the Nabralift tower is its increased stiffness compared to other metallic solutions. The impact of the performance of the wind turbine due to this characteristic of increased stiffness is presented below.

Standard tubular towers of heights greater than 110-120m are no longer soft-stiff and become soft-soft, however this does not occur in concrete towers or in the Nabralift solution which maintains its first mode above 1P (see Figure 1). These definitions are explained graphically in the Campbell Diagram of Figure 1, which includes:

Figure 1 – Comparison of Tower Height vs. Frequency and a Campbell Diagram

To evaluate the influence of the stiffness in the dynamics of the Wind Trubine, the design of the first model of the Nabralift tower of 160m in height is compared with the predesign of a steel soft-soft tower. For the same hub height (160m), same rotor diameter (130m) and same nominal power (3.5MW), a difference in mass of almost 200T is seen between the two technologies. Furthermore, due to the difference in stiffness of the two towers, the deflection of a standard tower under a static load of 1MN is more than double that of the Nabralift tower, see Table 1.

Table 1 – Definition of the selected models of tower

To verify the influence of each technology on the behaviour of the wind turbine, the deflection at the top of the tower and the bending moment at the root have been analysed (see Figure 2).

The most interesting results of the analysis are seen when comparing the behaviour of the wind turbine in critical design scenarios:

The comparison of the overall results (all the load cases required as part of the IEC standard for ultimate limit state static and fatigue loads) shows a considerable difference between the two tower models in terms of extreme bending loads at the tower base (see Figure 5). The difference is even greater when considering the equivalent fatigue load outside the range of resonance frequencies. This comparison highlights the advantages for the tower and foundation design that Nabralift gives by allowing the possibility of a metallic soft-stiff tower above standard heights.

Figure 5 – Global Results: Bending moment at tower base. Loads for ULS and FLS.